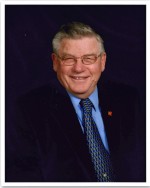 At South Huron Hospital, Exeter on Friday, February 27, 2015 of Exeter and formerly of Hensall in his 76th year. Beloved husband of the late Beatrice Anny (Jones) Uyl (2014). Loving son of Adrianna Uyl of Exeter and the late Peter Uyl (1972).  Dear father of the late Darlene (2008) and Peter Uyl of Exeter.   Dear grandfather of Brent Lawrence of Goderich and Jessica Lawrence of Toronto. Dear brother and brother-in-law of Jane and David Harris of Ottawa, Ann Kikkert of Zurich, Tony Uyl, John and Ruth Uyl, and Peter and Linda Uyl all of Blyth, Bernice and Bob Brook of London, and Blossom Jones of London.  Remembered by several nieces and nephews. Predeceased by his son-in-law Paul Lawrence. Larry was a proud lifetime member and past-president of the Royal Canadian Legion – Branch #468 Hensall.

Donations to World Renew would be appreciated by the family.

Offer Condolence for the family of UYL: Laurence (Larry) of Exeter formerly of Hensall