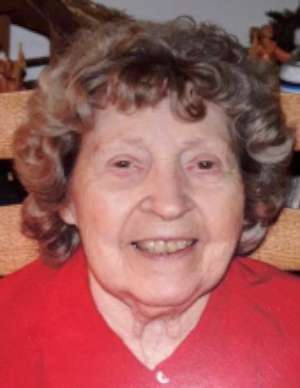 Lois Gwendolyn Morley of Hazel Park, went home to be with her Lord and Savior December 3, 2021. She was 105 years old. Gwen was born in Whalen Corners, Ontario, Canada on September 6, 1916 to Roy and Vera (Ogden) Neil.

Gwen has been a resident of Hazel Park since she was 6 years old. She was a graduate of Hazel Park High School in 1935. Gwen was a very active and long-time member of the Eastern Star as well as a past president of the PTA. She was also a charter member of the First Baptist Church of Hazel Park and a long time Sunday School teacher. Gwen had many joys in life including chocolate, birds, and the Royal Family. She enjoyed watching I Love Lucy, the Olympics, and America’s Got Talent. Her greatest joy was her family and spending time with them at numerous family gatherings.

A private family graveside service will be held at St. James Cemetery, Clandeboye on Friday, December 10th at 10:30 AM. Though the service is private, the family invites you to join with them from the comfort of your home. Stream the service live or at your convenience by visiting www.facebook.com/haskettfh.