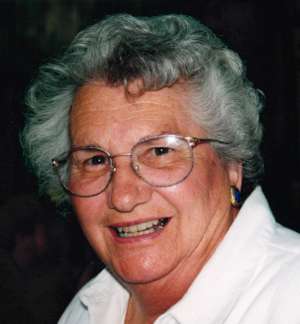 With love and reverence, we share with you Kay’s peaceful passing on Tuesday, May 3, 2022 at Jessica’s House, Exeter, ON. Born on October 29, 1924 in Owen Sound, ON, Kay was the daughter of the late Ernest and Lillian Waines. She is predeceased by her much-loved husband Ronald Ira Mock, her sister Margaret Seabrook, and brother Kenneth Waines. Kay will be greatly missed as the matriarch of the family by her loving children Dennis and the late Peg of Toronto; Ted and Vicki Mock of Brighton; Linda McCall of Exeter; Mary and Gary Berscht of Heidelberg; Doug and Cathy Mock of Regina, SK; Tim and Laurice Mock of Duncan, BC; and Julie and John Byrne of London. She will be forever in the hearts of grandchildren the late Jeff, Steven, Jacob, Andrew, Chris, Michael, and Cameron as well as six great-grandchildren.

Kay was a blessing to her family, and her commitment to being a mother and a loving partner was legendary. She was an exemplary role model to everyone she encountered, especially her family, and lived life with openness, sensitivity, love, and patience. Kay was an active member of Hensall United Church and in the Hensall community. At age 90, she was awarded Volunteer of the Year by the Exeter Times-Advance for her volunteer work on church committees and at Queensway Nursing Home. After her family was grown, Kay took great joy travelling, first with Dad, and then with her daughters and her friend Helen McLean. She loved dining out with her Hensall “ladies.” In her later years, she enjoyed the view from her windows where she could watch the birds and the comings and goings at Metzgers. Kay lived independently in Hensall until age 95. We offer a warm thank you to her caregiver Cindy O’Keefe who provided the care so that mom could remain in her home. In 2020, Kay moved to the retirement home at Exeter Villa. Words cannot express the gratitude we have for the staff of Exeter Villas, South Huron Hospital, and Jessica’s House for the care and compassion shown to mom during her final weeks and days.To know Kay was to love her and to know her love and unconditional acceptance. Her inner strength and will to live life to the fullest remained with her throughout her almost 98 years. She will be missed but never forgotten.

If you choose to do so, donations in Kay’s memory can be made to South Huron Hospital, Jessica’s House, or a charity of your choice would be appreciated by the family.

Offer Condolence for the family of MOCK: Kathleen “Kay” Ada (Waines) of Exeter and formerly of Hensall