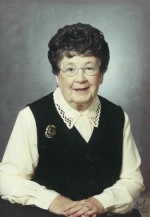 At South Huron Hospital, Exeter on Thursday, March 10, 2011 of Centralia and formerly of Chatham in her 85th year. Beloved wife of the late George Sereda (1990). Dear mother of Paul Sereda and Greg Harshman of Ottawa, Pam and Andy Megens of St. Marys and Pete and Paula Sereda and Perry and Michelle Sereda all of Centralia. Dear grandmother of Julie, Sarah, Georgina, Garrett, Anna Marie; Jasmine, Megan; Zachary and Alexa. Dear sister and sister-in-law of Fred and Marj Glover of Okanagan Falls, BC and Walter and Ruth Sereda and Bill and Olga Sereda all of Chatham. Predeceased by her parents Joseph and Kathleen (O’Connor) Glover, sisters Marilyn Jackson and her husband Allan, Eileen McMahon and her husband Jack, brother Vernon Glover and his wife Harriet, brother-in-law Carl Sereda and his wife Helen and sister-in-law Mary Rylett. Maxine was very involved in the Exeter community and the Exeter United Church.

Friends may call at the Haskett Funeral Home, 370 William Street (1 west of Main), Exeter on Monday 2-4 and 7-9 PM. The funeral service will be held at Exeter United Church, 42 James Street, Exeter on Tuesday, March 15th at 11 AM with Rev. Paul Ross officiating. Interment Exeter Cemetery.

Donations to the South Huron Hospital Foundation or the Exeter United Church would be appreciated by the family.

Offer Condolence for the family of Maxine (Glover) Sereda