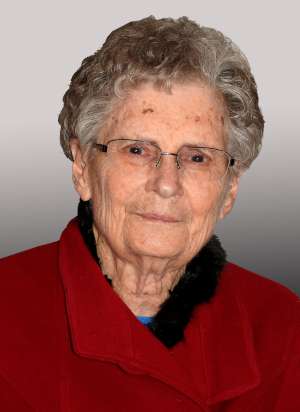 Cecelia Marie, first born of Kuno and Theresa (Ducharme) Hartman, was born on October 18, 1927. They lived on a farm on the Goshen Line, four miles south of Zurich. Over the following 20 years she would be joined by one sister and eight brothers. At age 19 plus one day she married Louis Farwell, and moved north on the Goshen Line to the tenth concession, where they farmed together for 34 years, raising ten children. Upon retiring from farming, they settled in Zurich. Three words graced Cecelia’s front door, and they paint a very special picture of what she cherished in her life: Faith, Family, Friends. A lifelong resident of the Zurich area, Cecelia always spoke kindly of her friends and neighbours. She was an avid quilter, a community volunteer and a member of the Catholic Women’s League, the Bluewater Rest Home Auxiliary and the Golden Agers. She was a regular visitor of the elderly at the rest home but she vowed to spend her final days at home. Cecelia remained true to her faith for her entire life. A lifelong member of St. Boniface Parish, from Baptism to final blessings, Cecelia lived a life devoted to the teachings of the scriptures and set an example of how to live as a devout Catholic. Faith and Friends formed the cornerstones of Cecelia’s life, and Family was her anchor. An inspiration to her entire family, she was delighted to spend time with her children, grandchildren, great-grandchildren, nephews and nieces. Cecelia was most proud of her role as Mother, and it is fitting that she was called to the arms of the angels on Sunday, May 10, 2020, Mother’s Day.

With the state of current events, a private family funeral will be held on Wednesday, May 20th at 11:30 AM with interment at St. Boniface Cemetery on the Bronson Line. Though the service is private, the family invites you to join with them from the comfort of your own home. Stream the service live by visiting https://www.facebook.com/haskettfh/ . A Funeral Mass and celebration of life to follow when the time is right. Please offer your prayers that we return soon to a kinder and gentler world. Haskett Funeral Home, Zurich entrusted with arrangements (519-236-4365).

Offer Condolence for the family of FARWELL: Cecelia Marie (Hartman) of Zurich