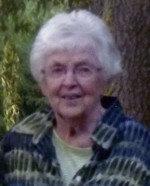 Peacefully at South Huron Hospital, Exeter on Tuesday, July 31, 2012, of Exeter and formerly of Centralia in her 88th year. Beloved wife of the late Russell Wilson (1978). Dear mother of Marg Wilson and Jeff Procure of London, Norm Wilson, Don and Patti Wilson all of Lucan, Donna and Dan Borm of Belmont, Linda and Bill Armstrong of Exeter, and Barb and Norm Regier of Dashwood. Dear grandmother of Brad and Carrie, Kara, Rachelle and Steve, and Nick; Ashley and Jamie; Erin and Karly; Brent and Alicia, Chris and Jan, and Scott and Danielle; Darren and Kelsey; and great-grandmother of Destiny, Shyanna, Skye, Hunter, Dominic, Logan H., Logan B. Lauren and Jayden. Dear sister-in-law of Helen Wilson of Arkona. Fondly remembered by many nieces and nephews. Predeceased by a daughter-in-law Cindy Wilson and a sister Dorothy Lambie.

Friends may call at the Haskett Funeral Home, 370 William Street, one west of Main, Exeter on Thursday 2-4 and 7-9 where the funeral service will be held on Friday August 3rd at 11AM. Interment Arkona Cemetery.

Donations to the Canadian Cancer Society or the charity of your choice would be appreciated by the family.

Offer Condolence for the family of A. Lois (Murray) Wilson