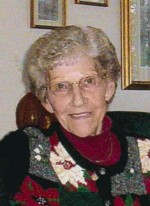 Peacefully, at Queensway Nursing Home, Hensall on Sunday, June 12, 2011 of Hensall in her 87th year. Beloved wife of the late William Alexander (Sandy) Munn (1998). Dear mother of Bill and Marlene Munn of Hensall and Sandra and Dalton Jaques of Usborne Township. Loving grandmother of Ryan and Terri, Kevin and Stefanie, Carol-Anne and Alex; Charlsey and Shawn and Kelsey and Nick and great-grandmother of Owen and Adam. Dear sister and sister-in-law of Loreen Gill of Grand Bend, Mary and Bill Rowcliffe of RR 1 Hensall, Lillian Watters of Toronto, Jack and Betty Borland of Woodham, John Hodgins of Exeter, Betty Simmons of Exeter, Gordon and Jean Munn of Exeter and Eunice Munn of Hensall. Also missed by several nieces and nephews. Predeceased by her son Bryan (1950), brother Bert Borland and sisters Lyla Rudolph, Alma Borland and June Hodgins.

Friends may call at the Haskett Funeral Home, 370 William Street, 1 west of Main, Exeter on Tuesday 2-4 and 7-9 PM where the funeral service will be held on Wednesday, June 15th at 11 AM with Pastor Brian McGuffin officiating. Interment Exeter Cemetery.

Donations to the Hensall United Church or the Heart and Stroke Foundation would be appreciated by the family.

Offer Condolence for the family of Wilma (Borland) Munn