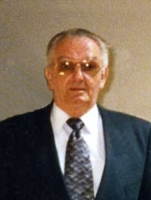 At South Huron Hospital, Exeter on Monday, October 27, 2008 William (Bill) H. Waddell of Exeter in his 81st year. Beloved companion and best friend of Alice Steranka. Dear father of Paul and Glenda Waddell of Exeter and Colleen (Ky) Waddell and Deborah of London. Step-father of Wayne and Patsy Steranka of Marsville, Steve and Joslin Steranka of Toronto, Darlene Steranka and Terry Bedard of Exeter, Gary and Kelly Steranka of Acton, Rick and Darlene Steranka of Grand Valley, Donna Steranka of Orangeville and Jane and Wayne Johnson of Guelph. Dear grandfather of Zackary and Uncle Bill to Alex. Dear brother and brother-in-law of Marg and Brad Davey of Cobourg and Aura Waddell of London. Predeceased by his sister Rita and his brother Bruce. Friends may call at the Haskett Funeral Home, 370 William Street, 1 west of Main, Exeter on Wednesday 2-4 and 7-9 PM where the funeral service will be held on Thursday, October 30th at 11 AM with Pastor Doug Watson officiating. Cremation with interment Exeter Cemetery. Donations to the Canadian Diabetes Association, Canadian Cancer Society or the Exeter Lions Club would be appreciated by the family.

Offer Condolence for the family of William (Bill) H. Waddell