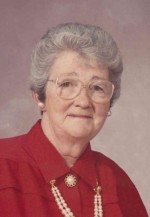 Suddenly, at South Huron Hospital, Exeter on Thursday, November 10, 2011 of Exeter in her 83rd year. Beloved wife of the late Reynold (Ray) Wuerth (2004). Dear mother and mother-in-law of Steve Wuerth of Cochrane, Alberta, John and Linda Wuerth of Exeter and Cindy Wuerth of Calgary. Dear grandmother of Rey, Casey and Robyn Wuerth; Rebecca Wuerth-Sarvis and Mike Sarvis, Sarah and Jeremy Geoffrey, Amanda Wuerth and great-grandmother of Lucas, Callie, Payton and Harper. Dear sister and sister-in-law of Joan and Vince Thompson of London, Jean Marshall of Sarnia, Bob and Bonnie Hunter of Strathroy, and Reg Wuerth of St. Catharines. Predeceased by sisters-in-law Hilda Wuerth and Elva Long and brothers-in-law Harley Marshall and Richard Long.

Friends may call at the Haskett Funeral Home, 370 William Street (1 street west of Main), Exeter on Sunday 2-4 and 7-9 PM, where the funeral service will be held on Monday, November 14th at 11 AM with Rev. Paul Ross officiating. Interment Exeter Cemetery.

Donations to the South Huron Hospital Foundation or the Exeter United Church would be appreciated by the family.

Offer Condolence for the family of Willa J. (Hunter) Wuerth