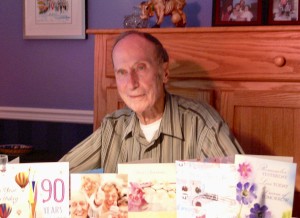 At LHSC – University Hospital, London on Tuesday, March 24, 2020 of London and formerly of Toronto in his 93rd year. It is with great sadness that’s Fred’s companion and partner Ralph Topp was unable to be with him in his final moments because of the restrictions of people movement created by the COVID19 virus. Fred will be fondly remembered by his great nieces and nephews. Predeceased by his parents James and Mary (Hartup) Watkins, his sisters Mary and Betty, nieces Susan and Nancy and nephew Jim.

Cremation has taken place and a graveside service at St. Georges Anglican Cemetery, Middlesex Centre will be postponed until a more appropriate time, when family and friends are able to gather and share love, support and hugs.

I (Ralph) want to tell the story of how Fred struggled with advancing dementia.

Turning the clock back to December 2018, I took Fred to Mexico for the winter.  He had a circulation problem in his right leg and needed regular exercise. Early on, he was able to follow my instructions when walking outside our apartment without getting lost. As the time moved forward I was getting more nervous about letting him go for a walk alone, even with simple instruction. He would turn off the planned course and go down a side street. I always kept him in my mind and never had to call the Mexican police to find him. It wasn’t long before I had to make a change in his exercise program and confine him to the walkway outside the apartment. The walkway was on the second level and had a railing that was a proper height to keep him safe. The stairs at the end of the walkway formed a natural barrier for him and he never attempted to go down unless I was watching him. He developed a trust with me such that I could leave for an hour or so and to do shopping and he would always remain on this designated walkway outside our apartment. The neighbours were kind and understanding. They would often strike up a conversation with him. When we left Mexico April 2019 I congratulated myself that Fred didn’t have any serious falls, didn’t get hopelessly lost, I didn’t have to call the police to bring him back and he didn’t have to be admitted to a doctor’s office or hospital in Mexico.

When we returned to Ontario I wanted him to be with me and I wanted to look after him. During this time I was beginning to see that I had my work cut out for me to care for him. He wanted to go out on his own but didn’t want to use his walker. He was becoming more unsteady on his feet and needed support. He never did make friends with his cane!

One neighbour in particular was disabled, had a motorized wheel chair and would run up and down the neighbourhood and bring Fred back when he got lost. I only had to call the London police once to find him and bring him home.

My work looking after Fred was becoming increasingly onerous. I was on my own looking after him and the amount of work was gradually approaching 24 hours daily. The government assistive services did not suit my routine and would have made more work for me rather than less work as is the intent of the program. My overtiredness was starting to be reflected in Fred’s care and I hated myself for some of my reprimands.

In my neighbourhood, within easy walking distance, was a retirement residence (Maple View Terrace). After checking into its suitability, I decided that this would become Fred’s new home. His mind was still intact enough to understand what was happening. He begged and pleaded with me not to take him away. He thought it was happening because he was being a burden to me. He said he would make any change necessary in order to stay with me.  In late May 2019 the transition to Maple View was made, an extremely difficult life decision for me.

Maple View gave him good care and put him in a room on the 6th floor where the staff could better observe him. Serge Pigeau, a friend and neighbour was involved with Fred at this time and visited him often. Fred wandered among the rooms of other residents, particularly at night. Most residents were understanding of his condition and would usher him back to his room. Some residents, however, were hostile and used loud voices. Fred continued to look for his mother, his father, his home, the money that wasn’t in his pocket, the taxi to take him home etc. We soon learned that we needed to live in Fred’s world when conversing with him and not attempt to bring him back to reality. I was never quite sure that Fred knew me. He would recognize my face and give me a smile. He did, at times, think Ralph was that guy sitting at the table on the other side of the room. He never lost his art of being gracious and always did his best to smile and talk with individuals he couldn’t remember. Dr. Samir Datta was his family physician and faithfully attended to Fred during his time at Maple View.

Fred had a sweet tooth. His love of ice cream and chocolate sauce never left him. Serge and I would take him out for dinner once a week and the dessert remained his favourite part of the meal. One dessert in particular was one offered by Swiss Chalet. It was huge with lots of ice cream and chocolate sauce and other goodies that he adored. He always ‘licked the platter clean’.

In December 2019 I decided to return alone to Mexico. Fred’s living was in place and Serge was groomed to be Fred’s advocate in my absence. My friends and people knowing the situation strongly encouraged me to go. A very difficult decision that I am still agonizing over. While in Mexico, I was in daily phone contact with Serge.

Fred’s unsteadiness on his feet continued getting worse with his falls becoming more frequent. Maple View began sending him to the hospital more often for observation. In early March 2020 Fred was admitted to University Hospital in London and did not return to Maple View.

While still in Mexico I was in telephone contact with his doctors and nurses. They all were very caring individuals and gave me the impression that they were all well placed in their jobs. All of us had one common goal: to make decisions in Fred’s best interests.

Fred was always very close to his mother and often told the story about the common developmental problem he shared with his mother. Mary (Fred’s mom) kept telling him that she hoped Fred didn’t inherit her throat. There’s not much doubt about his inheritance of the problem. As long as I knew Fred he did have his mother’s constricted throat and had to eat slow. While dining out, friends and waiters all had to be sensitive to Fred’s need for more time to eat. If rushed, sometimes he would choke with a complete blockage. Other times he would not finish his food if the table had already been cleared of the plates etc of others. Fred, being Fred, would sit there quietly and not say anything until I was able to figure out the problem and speak to the waiter.

While in the hospital his throat problem became worse to the point where he had to be fed by a nasogastric tube and then not at all because of nonplacement of the tube. At this point, I was once again contacted by doctors at UH and also by palliative care doctors. Fred didn’t know where he was or why he was there. We all agreed that the time was right to remove most of Fred’s treatment and let his body decide for itself where it wanted to go. Tuesday night, March 24, 2020 I received the phone call that Fred had passed away.

Offer Condolence for the family of WATKINS: Fred of London and formerly of Toronto