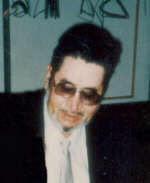 At London Health Sciences Centre, Victoria Campus, London on Wednesday, October 20, 2004 Wallace Kenney of London in his 73rd year. Wally will be missed by his sons Don and Sandra Kenney of London and Bruce and Sharon Kenney of British Columbia and their mother Yvonne Albert of Muncey. Dear grandfather of  Donald, Mike, Tim, and Jamie; Dillon and Don. Dear brother of Rena Thompson of Strathroy, Eva and Gerald Tyler of Dashwood, Doris Kirk of Hensall, Mary Massa of Strathroy, Joseph Kenney of RR# 2 Lucan, Arnold George of London, and Sharon Henry of Denfield.  Friends may call at the C. Haskett and Son Funeral Home, 223 Main St, Lucan on Friday from 7-9PM where the funeral service will be held on Saturday, October 23, 2004 at 11 AM. Cremation with interment St. James Cemetery, Clandeboye. Donations to the Lung Association or Heart & Stroke Foundation would be appreciated by the family.

Offer Condolence for the family of Wallace Donald Kenney