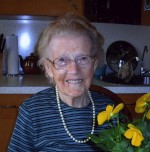 Friends may call at the Haskett Funeral Home, 223 Main Street, Lucan on Tuesday, April 12th from 10-11:30 AM where the complete funeral service will be held at 12 noon with Bob Heywood officiating. Interment Exeter Cemetery.

Donations to South Huron Hospital Foundation or the chairty of your choice would be appreciated by the family.

Offer Condolence for the family of Viola (Eagleson) Atkinson