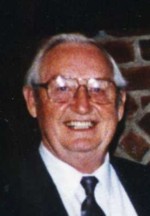 Thomas Bennett (Ben) Fisher of Exeter passed away quietly at home with his family by his side on Sunday, April 2, 2006, in his 73rd year.  Beloved husband for 46 years of Marie (Johns) Fisher.  Dearly loved father and father-in-law of Randy and Janice Fisher of Talbotville, Cindy (Fisher) Cousineau of Lucan and Jerry Cousineau of Lucan.  Cherished grandfather of Thomas, Adam and Meredith Fisher; and Ryan, Graham, Marc and Chloe Cousineau.  Dear brother of Belva (late Harold) Rowe and Iva (late Bob) Blair both of Exeter, Ferrol (late Amos) Warwick of Port Huron, Michigan, the late Glenn (Mary Fisher of Exeter), the late Wallace (Bud) (Marilyn Denstedt of London), and the late infant brother Bob.   Beloved brother-in-law of Jean (late Norman) Johns of St. Marys, Gordon and Evelyn Johns of Woodham, Marj and Howard Hodge of Exeter, and Kay (late Ford) Stark of St. Marys. Uncle Bennie will be missed by many nieces and nephews.  Born January 16, 1934, son of the late Clark and late Ella (Baker) Fisher.   Ben was retired from the trucking industry and in his earlier career worked for the railroad.  Ben was recording secretary of the Exeter Oddfellows Lodge #67, a member of Exeter United Church, and he enjoyed playing golf, watching his grandsons play hockey, and having breakfast with the gang.   Friends may call at the Hopper Hockey Funeral Home, 370 William Street, Exeter on Tuesday 3-5 and 7-9 PM where the funeral service will be held on Wednesday, April 5th, at 1:30 PM with Rev. Paul Ross officiating.  Cremation with interment at Exeter Cemetery.  Donations to Exeter United Church, the Canadian Cancer Society, or Saint Elizabeth Health Care would be appreciated by the family.  There will be an Oddfellows Service at the funeral home Tuesday evening at 6:30 PM.

Offer Condolence for the family of T. Bennett (Ben) Fisher