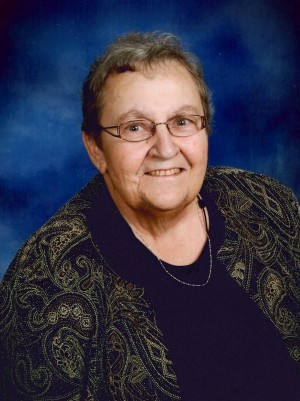 Passed away peacefully, with family by her side, at South Huron Hospital, Exeter, on Sunday, May 15, 2016, formerly of RR 1 Varna, in her 77th year.  She was born August 9, 1939 in Stanley Township.  Beloved wife of the late William Lewis Steckle  (April 9, 2013).  Cherished mother of Robert and Brenda Steckle of RR 1 Bayfield, and Dianne and Doug Sparling of Tavistock.  Loving grandma to Trevor, Patrick, and Brendan Steckle; and Chantelle, and Blair Sparling.  Dear sister and sister-in-law of Jean Gingerich, and Mel and Audrey Melick; Paul and Kathy Steckle, Esther Steckle, Ferne and Lloyd Mumaw, Jim and Carolyn Steckle, Mary Steckle, and Gary Foshay.  Missed by her nieces and nephews.  Predeceased by her parents Edna (Schwartzentruber) and Amos Gingerich, her step-mother Della Gingerich, her infant brother Douglas, and her brother-in-law Ken Gingerich, her mother and father-in-law Lydia and Daniel Steckle, and mother-in-law Seleda (Shantz) Steckle.  Betty drove school bus for 35 years, enjoyed birds, and visiting with her many friends and neighbours.

Friends may call at the Haskett Funeral Home, 49 Goshen Street North, Zurich on Friday 2-4 and 7-9 PM.  The funeral service will be held at the Zurich Mennonite Church, 37818 Zurich-Hensall Road, Zurich on Saturday, May 21st at 11 AM with Pastor Ryan Jantzi officiating.  Interment Zurich Mennonite Cemetery.

Donations to Zurich Mennonite Church, Canadian Diabetes Association, or Blessings Community Store would be appreciated by the family.