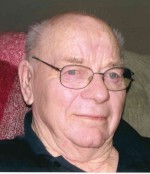 Peacefully, at South Huron Hospital, Exeter on Wednesday, March 30, 2011 of Exeter and formerly of Hensall and Usborne Township in his 88th year. Cherished husband of Leita (Kinsman) Ferguson. Beloved father of Joyce and John Morgan of Usborne Township, Larry and Gisele (Truchon) Ferguson of North Bay and Jim and Linda (Fleming) Ferguson of Hensall. Loving grandfather of Becky and Scott Simpson, Christine and Brian Merrigan, Monique and Georges Dubytz, Michael Ferguson, AJ Ferguson and friend Leah Bolton and Scot Ferguson and great-grandfather of Jesse, Stephanie, Ethan, Anna, Sarah and Felix. Dear brother and brother-in-law of Howard and Lorna Ferguson of Thamesford, Lloyd and Shirley Ferguson of Exeter, Velma and Grant Gowanlock of London, Jack and Elaine Kinsman of Staffa and Bob and Frances Kinsman of Hensall. Loved and respected by many nieces and nephews. Predeceased by his parents Joseph and Margaret (Parsons) Ferguson and sister-in-law Mary Kinsman. Russell will be remembered for his love of a good visit, a fine meal, a well-played baseball game, snooker shot, dancing and the view from his window.

Friends may call at the Haskett Funeral Home, 370 William Street, 1 west of Main, Exeter on Friday 2-4 and 7-9 PM where the complete funeral service will be held on Saturday, April 2nd at 11 AM with Bob Heywood officiating. Spring interment Hensall Union Cemetery. There will be an Oddfellows service in the funeral home Friday evening at 6:30 PM.

In lieu of flowers, donations to a local charity of your choice would be appreciated by the family.

Offer Condolence for the family of Russell Calvin Ferguson