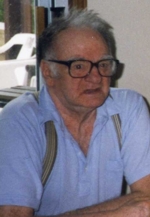 At on Sunday, January 18, 2009 Ross L. Jaques of Hensall and formerly of Usborne Twp. in his 82nd year.  Beloved husband of the late Helen () Jaques (2005).  Dear father of John and Marie Jaques of . Dear grandfather of Matthew of B.C., Andrea and Tom of Clinton, Isaac and Rachel of Woodham and great-grandfather of . Dear brother-in-law of Leona Jaques, Arnold and Lois Anderson, Audrey Lambourn, George and Jean Anderson, Viola Anderson, Eileen and Howard Hodgson, Velma and Alvin Leonhardt, and Lloyd and Betty Anderson.  Predeceased by brothers Oliver and Cliff, a sister Verna Bower, a great grandson Hunter, a brother-in-law John Lambourn and a sister-in-law Noreen Anderson. Friends may call at the Haskett Funeral Home, , 1 west of Main, on Monday 2-4 and 7-9 PM where the funeral service will be held on Tuesday, January 20th at 11 AM with Mr. Bob Heywood officiating.   . Donations to the Canadian Cancer Society would be appreciated by the family.

Offer Condolence for the family of Ross LeRoy Jaques