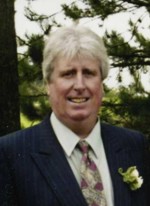 At London Health Sciences Centre, Westminster Campus on Monday, April 10, 2006 Robert (Bob) A. Hoffman of London and formerly of Exeter in his 48th year. Beloved son of Claire and Winona (Coxen) Hoffman of Exeter. Dear brother of Doug and Kim Hoffman of Yardley, Pennsylvania and Karen Hoffman and Steve Darasch of Toronto. Dear uncle of Philip and Grace of Yardley, Pennsylvania. Father “Bubbah” to Mark and Tina, Lindsay and Bryan, and Erin all of London. Friends may call at the Hopper Hockey Funeral Home, 370 William Street, one west of Main, Exeter on Wednesday 2-4 and 7-9 PM where a memorial service will be held on Thursday, April 13th at 11AM with Mr. Bob Heywood officiating. Cremation with interment Crediton Cemetery. Donations to London Regional Cancer Program would be appreciated by the family.

Offer Condolence for the family of Robert (Bob) Alan Hoffman