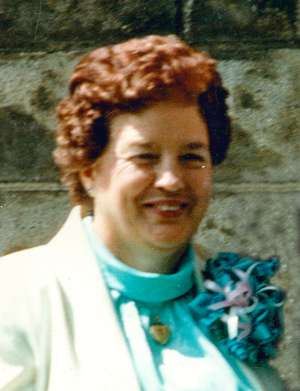 Passed away at the Seaforth Long Term Care Home on Tuesday, August 24, 2021 at the age of 92. Beloved wife of the late Robert Riley. Cherished stepmother of Agnes (the late Robert) Marks, Thelma (Bill) Bernard, Sharon Miller (the late Gord Russo), Joyce (Bill) Brinn, Glenn (Cheryl) Riley, and Roy (Dianne) Riley. Adored step-grandmother of 13 and step-great grandmother of many. Sister-in-law of Ruth Lamont. Fondly remembered by her many nieces and nephews and a special thanks to Larry Lamont for the care he showed to Mary over the years. Predeceased by nephews Larry Lamont, and Robert Lamont. Brothers Arnold, Donald (Mabel), Harvey (Ellen), Hector, and Norman Lamont, and sisters Margaret (Bert) Ausman, and Nelly Lamont.

Mary lived on the Lamont farm in Brussels and worked at Campbells soup factory for many years. Settling into retirement Mary and Bob moved to Port Loring where Mary grew up as a child. Mary enjoyed watching the deer and feeding the birds in her free time.

A private family graveside service will be held at Clinton Cemetery on Thursday, August 26, 2021 at 2PM. Arrangements entrusted to Haskett Funeral Home, Seaforth (519-527-1390)

Donations to the Seaforth Long Term Care Home – Residints Council Fund or Diabetes Canada would be appreciated by the family.

Offer Condolence for the family of RILEY: Mary Elizabeth (Lamont) of Seaforth formerly of Brussels