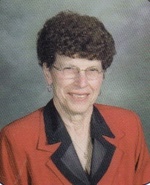 At Bluewater Rest Home, Zurich, on Friday, October 5, 2012, Marjorie Aileen (Datars) Reichert formerly of Zurich and Clinton, passed away in her 89th year. Beloved wife of the late Ervin Reichert (1998). Dear mother of Carol and Craig Davidson of Exeter and Ken and the late Donna (Sept 24, 2012) Thiel of Zurich. Loving grandmother of Karl Davidson, Karla and Matt Simpson, Kelly and Jordan Jeffrey, Dana Thiel and Brandon Skinner and Jeff Thiel and Tiffany Loughead and great-grandmother of Declan and Myer Simpson and Bryce and Danica Jeffrey. Dear sister-in-law of Lauretta Fields. Predeceased by one sister Doreen Datars in infancy.

Donations may be made to St. Peter’s Lutheran Church, the Bluewater Rest Home, Zurich or a charity of one’s choice.

Offer Condolence for the family of REICHERT: (Daters) Marjorie Aileen formerly of Zurich