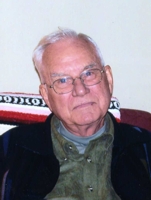 At LHSC-Victoria Hospital on Sunday, December 23, 2007 Raymond Barclay Hodgson of Exeter and formerly of London in his 80th year.  Beloved husband of June (Sinclair) (Robinson) Hodgson and the late Anne (Bakovy) Hodgson (1986).  Dear father of Mary Anne and Jack van de Vooren of London, Betty Lou and Stuart Ganske of Cartwright, Manitoba, Wes Hodgson and Michele of Northwest Territories, Gordon and Sigrid Robinson of St. Joseph Island, Michele and Steve Haberer of Zurich, Paul and Heather Robinson of Nairn and Deane and Wendy Robinson of London.  Dear grandfather of Krista and Terri; Wendy, Stephanie and Jeffrey;  Sam, William and Margaret; Sarah and Lois; Lindsay, Nick, Lauren and Kelsey and great-grandfather of Linkin, Aiden and Brooklyn.  Dear brother and brother-in-law of Howard and Eileen Hodgson of St. Marys, Joyce Hodgson of Windsor, Marguerite Hodgson of Nanaimo, Shirley and Reg Harris and Harold Carter all of St. Marys.  Predeceased by sisters Ruth Carter and Edith Hodgson and brothers Roy, David and Ken Hodgson.  Friends may call at the Haskett Funeral Home, 370 William Street, 1 west of Main, Exeter on Friday, December 28th one hour prior to the funeral service which will be held at 11 AM with Rev. Paul Ross officiating.  Donations to the South Huron Hospital Campaign would be appreciated by the family.

Offer Condolence for the family of Raymond Barclay Hodgson