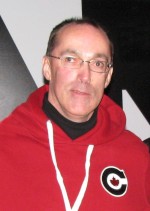 At South Huron Hospital, Exeter on Wednesday, October 5, 2011 in his 45th year of Grand Bend and formerly of Hensall. Beloved son of Susan Riley of Hensall and the late Leslie Riley (1997). Sadly missed by his “Bro” Duke. Dear grandson of Wyn Riley of Seaforth and the late Bert and Elizabeth Riley and the late William Stinson. Survived by his “work mom” Karen Courtney of Varna, friend Neil McAllister and his children and his numerous aunts, uncles and cousins.

Pat was an avid athlete participating in baseball, volleyball and broomball. He enjoyed his time working at Bluewater Youth Centre as a corrections officer. He and his mother Sue have fulfilled his dream of traveling over the last few years making their way to New York, Boston, Chicago, Arizona, Eastern Canada and Portugal.

Friends may call at the Haskett Funeral Home, 370 William Street, 1 block west of Main, Exeter on Friday 2-4 and 7-9 PM. The funeral service will be held at Hensall United Church, 76 King Street, Hensall on Saturday, October 8, 2011 at 11 AM with Rev. Chaplain Andy Hahn officiating. Interment Staffa Cemetery.

Donations to the OSPCA (Humane Society) or the charity of your choice would be appreciated by the family.

Offer Condolence for the family of Patrick “Pat” Riley