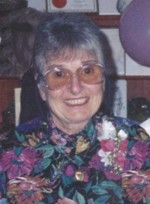 At Exeter Villa on Sunday, January 27, 2008 Patricia (Caddock) Deary of Exeter and formerly of Grand Bend in her 88th year. Beloved wife of William Deary. Dear mother of Patricia and Russell Rowlandson of Jasper, Alberta, Jo-Anne and Tom Stevenson of Hamilton, and David and Jennifer Deary of London. Dear grandmother of Scott and Kristin; Carrie and Chris, Jennifer, David and Euna; Adam and Cameron; and great-grandmother of Regan and Owen. Dear sister of Eileen and Robert Price of Exeter. Friends may call at the Haskett Funeral Home, 370 William Street, one west of Main, Exeter, one hour prior to the memorial service which will be held on Tuesday, January 29th at 11AM with Pastor Brad Dunbar officiating. Cremation with interment Grand Bend Cemetery. Donations to the Canadian Cancer Society would be appreciated by the family.

Offer Condolence for the family of Patricia F. (Caddock) Deary