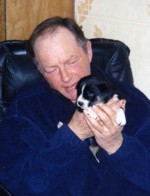 At University Hospital, London on Friday, April 7, 2006 Owen Rodger Fear of Exeter in his 54th year. Beloved son of Faye Fear of Clinton and the late Ted Fear (1992).  Dear father of Cheyenne Mosurinjohn and her partner Jason Willert of Hensall and Greg Fear of Exeter. Dear grandfather of Damien Willert. Dear brother and brother-in-law of Steve and Kim Fear of Banff, Alberta, Rhonda and Hugh Love of Atwood and Del Nixon of Exeter. Also survived by several nieces and nephews. Predeceased by a sister Wendy Nixon (1997).  Friends may call at the Hopper Hockey Funeral Home, 370 William Street, one west of Main, Exeter on Sunday 2-5 PM where the funeral service will be held on Monday, April 10th  at 11 AM with Rev. Alan Barr officiating. Graveside Service at Brandon Cemetery, Belgrave on Monday at 12:45 PM.  Donations to the Kidney Foundation or the Canadian Cancer Society would be appreciated by the family. Condolences may be forwarded through www.hopperhockeyfh.com.

Offer Condolence for the family of Owen Rodger Fear