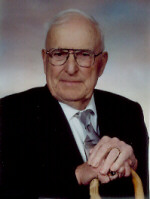 At Stratford General Hospital on Wednesday, April 2, 2003, Norman John T. Ferguson of Exeter and formerly of Bayfield in his 83rd year. Beloved husband of Olive Carrie (Schilbe) Ferguson. Dear father of Patricia Jean Benett and her friend Austin House of Brampton and Doris Ann Ferguson and her friend Ray Wanzo of Oakland. Dear grandfather of Ron and Jacqui Vercruyssen; and Carrie and Will King and Edward Culham and great-grandfather of Brooklyn and Ronnie. Dear brother and brother-in-law of Roy and Marie Ferguson  and Peggy Ferguson all of Exeter and Grace Hodgert of Mitchell. Also survived by several nieces and nephews. Predeceased  by a sister Wilhelmine Jaques, brother Wilmer, son-in-law Charles and grandson Daniel John.Friends may call at the Hopper Hockey Funeral Home, 370 William Street, 1 west of Main, Exeter on Friday 2-4 and 7-9 p.m.  where the funeral service will be held on Saturday, April 5th at 10:30 a.m. with Rev Paul Ross officiating. Interment Exeter Cemetery. Donations to South Huron Hospital Medical Clinic, Exeter United Church or charity of your choice would be appreciated by the family. There will be a Legion Service in the funeral home Friday evening at 6:15 p.m.  and  an Oddfellows Memorial Service in the funeral home Friday evening at 6:45 p.m.

Offer Condolence for the family of Norman Ferguson