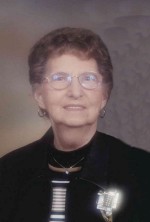 Suddenly, at her late residence on Thursday, July 14, 2011 of Exeter in her 84th year.  Beloved wife of Gordon Pengelly (2009) and Almer Passmore (1968). Dear mother of David and Sharon Passmore, Barb and Dennis Rau, Darlene and Bill Hooper and Dale and Pauline Passmore all of Exeter and the Pengelly Family: Ila and Arnold Mathers of Exeter, Lillian and Harold Leudke of Chesley, Karen McCallum of Wingham and Sharon Pengelly of Goderich. Dear grandmother of Tom and Sue Passmore, Jon Passmore and Chelsey Manning; Chris Passmore and Richard Sandals, Kim and Rob Kramer, Karen Passmore, Jamie Johns, 4 great-grandchildren and several step-grandchildren. Dear sister and sister-in-law Fred and Donna Haist of London, Helen Wasnidge of Exeter, Doris and Lorne Listoen of Vancouver, Maurice and Ruth Ann Haist of Crediton and Oren Grace of Michigan. Predeceased by her son Dennis Passmore and sister Bernice Grace.

Friends may call at the Haskett Funeral Home, 370 William Street, (1 west of Main), Exeter on Sunday 2-4 and 7-9 PM where the funeral service will be held on Monday, July 18th at 1:30 PM with Rev. Judith Ritchie officiating. Interment Exeter Cemetery.

Donations to the South Huron Hospital or the Thames Road-Elimville United Church would be appreciated by the family.

Offer Condolence for the family of Myrtle (Haist) Passmore-Pengelly