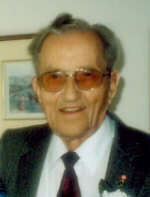 Peacefully at Strathroy Middlesex Hospital on Wednesday, September 8, 2004 Milton Reynolds Robbins in his 95th year.  Beloved husband of Edith (Leslie).  Dear father of Dalbert and his wife Elisabeth of Port Franks.  Loving grandfather of Stanley of Mississauga, Douglas and his wife Janet of Sarnia, Jeffrey and Katherine and her husband John O’Brien all of Hensall.  Dear great-grandfather of Nicole, Felisha, Devin and Lauren.  Dear brother of Roy and his wife Edith of Scott, Saskatchewan. Predeceased by his wives Katherine Staye (1969) and May Carter (1992), brother David (1991), sisters Pearl (1972) and Minnie (1982), and his parents David Wesley Robbins (1918), and Elizabeth Reynolds (1960).   During his lifetime he had a varied career, from farm help and construction worker, to owner of Canadian Tire in Exeter and was founder of Milt Robbins and Son Ltd. small engine repair.  He received a “Citizen of the Year” award in Stettler, Alberta and was very active in the senior’s community affairs there.  He moved back to Ontario in 1992 and kept busy with his golfing and bowling.  Friends may call at the Hopper Hockey Funeral Home, 370 Williams St, 1 west of Main, Exeter on Friday 2-4 and 7-9 PM where the funeral service will be held on Saturday, September 11th  at 10:30 AM with Rev. Paul Ross officiating.  Interment Exeter Cemetery.  Donations to the Heart and Stroke Foundation would be appreciated by the family.

Offer Condolence for the family of Milton Reynolds Robbins