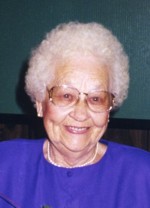 At Exeter Villa on Friday, February 4, 2011, in her 92nd year. Beloved wife of the late Norval Clarence Jones (1979). Dear mother of Eleanor Horn and Ron, Helen and George Pratt, Bob Jones and Sharlene, and Jim Jones all of Exeter. Dear grandmother of Steven and Carrie Horn, and Cynthia Henning; Brenda Morrissey and Andrew, and Sheila and Brian Brooks; Dale Jones, Kelly and Dan Morrison, Todd and Karen Jones and Cody Jones. Also missed by 14 great-grandchildren and 2 great-great-grandchildren. Dear sister-in-law of Helen Wasnidge of Exeter. Predeceased by a brother Jack Madge and a sister Beatrice (Ford) (Faber) Lacey.

Friends may call at the Haskett Funeral Home, 370 William Street, one west of Main, Exeter one hour prior to the funeral service which will be held on Monday, February 7th at 2 PM with Rev. Paul Ross officiating. Interment Exeter Cemetery.

Donations to South Huron Hospital Foundation or Exeter United Church would be appreciated by the family.

Offer Condolence for the family of Mildred Eva (Madge) Jones