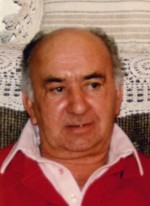 At Exeter Villa, on Saturday, October 18, 2014, of Exeter and formerly of Grand Cove Estates, Grand Bend in his 90th year.  Beloved husband of the late Amy (Powis) Mayers (2012).  Dear father of Carolyn and Reg Mills of Burlington, Dianna and Brian Holtzhauer of Victoria, B.C., Janice and Fred King of Hamilton, Rick Mayers of Hagersville, Jim Mayers of Toronto, and Roger Mayers of Hamilton.  Also missed by 4 grandchildren and 5 great-grandchildren.  Dear brother of Phylis, Pat, Cathy and Eddie, Bob and David. Predeceased by his daughter Sandra Van Brocklin, his grandchildren Sean and Jessica, great-granddaughter Kaylee, sisters Mary, Margaret and Christina, and his brother Donald.

Offer Condolence for the family of MAYERS: Bernard (Harry) of Exeter, and formerly of Grand Cove Estates