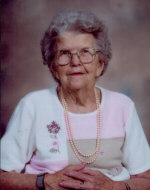 At Strathroy Middlesex General Hospital on Wednesday, October 19, 2005 Mary A. (Harrison) Scott of Lucan in her 92nd year.  Beloved wife of the late Wilmer E. (Scotty) Scott (2003).  Dear mother of Janet and Jack Heaman of Ailsa Craig, Jim and Audrey Scott, Judy and Harry Bond and Brenda and Bob Smith all of Lucan, Nancey and Sam Taylor of Swift Current, Saskatchewan and Betty Scott of London. Also survived by 14 grandchildren and 24 great-grandchildren.  Dear sister-in-law of Doris Harrison of Aylmer and Lloyd Elgie of London.  Predeceased by brothers Fred, Jack and George Harrison and sisters Elizabeth Phillips, Margaret Gilmour, Irene Leitch, Barbara Faulkner, Beryl Shipley and Dorothy Elgie.  Mary was a life member of the Clandeboye Women’s Institute.  Friends may call at the C. Haskett and Son Funeral Home, 223 Main Street, Lucan on Friday 2-4 and 7-9 PM where the funeral service will be held on Saturday, October 22nd  at 11 AM with Rev. Kathy Wreford officiating.  Interment St. James Cemetery.  Donations to Crohn’s and Colitis Foundation or the Easter Seal Society would be appreciated by the family.

Offer Condolence for the family of Mary Alice (Harrison) Scott