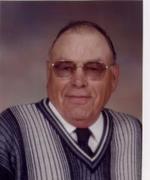 Peacefully, at his residence, surrounded by his family, on Monday, October 31, 2005, Glenn “E” Koehler, of R.R. 2 Hensall, in his 75th year. Beloved husband of Audrey (Campbell) Koehler. Dear father of Brenda and Richard Schilbe of Zurich, Garry and Brenda Koehler of Hensall and Betty Lynn and Doug Eckel of Zurich. Loving grandpa of Jason and Krista Schilbe, Shauna and Jillian Koehler and Jaime and Kraig Eckel and great-grandpa of MacIntyre and Hallee Schilbe. Dear brother and brother-in-law of Joan and Art McCallum, Dianne and Raye Armstrong, Linda and Denton Gaiser, Keith and Fiona Koehler, Elmer and Anna Campbell and Marg and Ray Consitt. Sadly missed by several nieces and nephews. Predeceased by his parents Bruce and Pearl (Willert) Koehler and one brother Donald and his wife Alice, his father-in-law Percy Campbell and his mother-in-law Emma Campbell.

Visitation in the Hensall Visitation Chapel, 79 King St. Hensall on Tuesday from 2-4 and 7-9 p.m. Where the funeral service will be conducted on Wednesday, November 2, 2005 at 11 a.m. Mr Bob Heywood officiating. Interment Hensall Union Cemetery.

Memorial contributions may be made to the Canadian Cancer Society or a charity of ones choice.

Offer Condolence for the family of KOEHLER: Glenn “E” of Hensall