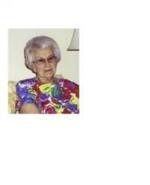 Geraldine “Gerry” (Surerus) Kane at rest on Wednesday, January 9, 2008 at age 96, after a long and productive life. Gerry was the beloved wife of the late Frank John Kane. They lived in Montreal for many years before retiring to Zurich where she was born. She was the last surviving member of the Oliver and Barbara Surerus family, which included her four brothers Leeland, Myron,Charold and Clare. In life and beyond she was and ever will be deeply loved and dearly cherished by her surviving family, daughters Barbara O’Connor and Anne Besozzi, sons-in-law Patrick O’Connor and Robert Besozzi and grandson Steven Besozzi.

Memorial contributions may be made to Emmanuel United Church or the Huron County SPCA.