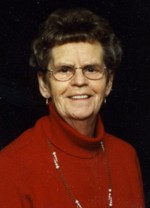 At London Health Science Centre, University Hospital on Thursday, June 24, 2010, of Denfield, in her 81st year. Beloved wife of the late Antonius (Tony) Vandenheuvel (2003). Dear mother of the late Frank (2010) and Rina Vandenheuvel  of Denfield, Gary and Nathalie Vandenheuvel of London, Marian and Lance Volkman and Janet and Rick Luder all of British Columbia, Nancy and David Broumpton of Denver, Colorado, Tony and Lisa Vandenheuvel of Denfield, Angela and Michel Houle of Woodstock and the late Michael Vandenheuvel (1998). Dear grandmother of 25 grandchildren and 3 great-grandchildren. Dear sister and sister-in-law of Anna and Ben Vermeulen of Milford, Station, N.S. and Rikki, Riny and Ties all of Holland. Predeceased by 5 sisters and 3 brothers.

Friends may call at the Haskett Funeral Home, 223 Main Street, Lucan on Friday 2-4 and 7-9 PM. The Funeral Mass will be celebrated at St. Patrick’s Church, Lucan on Saturday, June 26th at 11 AM with Father Terry McNamara presiding. Interment St. Patrick’s Cemetery.

Parish and CWL Prayers will be said in the funeral home Friday afternoon at 4 PM.

Offer Condolence for the family of Johanna A. (Brugmans) Vandenheuvel