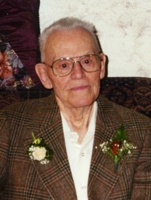 Peacefully, at Queensway Nursing Home, Hensall on Tuesday, January 15, 2008 Irwin (Bunny) George Ford formerly of Exeter in his 97th year, born September 1, 1911, son of the late Herbert and Cora Ford.  Loving husband for 73 years to Adeline (Stone) Ford and loving father of the late Mary Anne Miller (2000). Survived by his grandchildren: Dan and Patti Miller of Lindsay and their children, Scott, Peter and Ben Miller and Carolyn and Eric Skrypetz of Mississauga their children April and Ross.  Predeceased by his sisters and brothers-in-law Ruby and Roy Bell and Gladys and Bill Chambers.  Irwin spent 33 years as a volunteer firefighter for the Town of Exeter, acted as Fire Chief and was a Municipal Police Officer.  A private family service will be held at the Haskett Funeral Home, 370 William Street, 1 west of Main, Exeter on Thursday, January 17th with Rev. Paul Ross officiating.  Interment Exeter Cemetery.  Donations to the Exeter Volunteer Firefighters would be appreciated by the family.

Offer Condolence for the family of Irwin (Bunny) George Ford