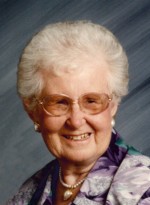 At the Exeter Villa, on Tuesday, September 15, 2015, of Exeter and formerly of Usborne Township, in her 88th year.  Beloved wife of the late Wilfred Hunkin (2007).  Dear mother of Margaret and John Johns of Usborne Township.  Dear grandmother of Matthew Johns and Brianne Bennett of Ilderton.  Dear sister and sister-in-law of Wilma Love of St. Joseph, Eleanor Hendrick of Exeter, and Cliff Jory of BC.  Predeaceased by her son Kenneth Hunkin (1992), her infant daughter (1953), sister Madeline Jory, brothers-in-law Hugh Hendrick, Rev. Mervyn Love, and sister-in-law Evelyn McBeath and her husband Alex.

Offer Condolence for the family of HUNKIN: Viola Margaret (Gilfillan) of Exeter and formerly of Usborne Township