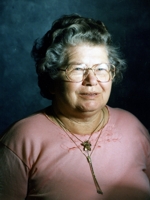 At Strathroy Middlesex General Hospital on Friday, August 22, 2008 Helen (Arndt) Whiteford of Watford and formerly of Glencoe and Parkhill in her 74th year. Beloved wife of the late Earl Whiteford (1996). Dear mother of Leona and Bill Morrison of Martlett, Michigan, Elaine and Oswald Gillard and David and Beverly Lumbert all of Newfoundland and Penny and Ron Paisley of Forest. Dear step-mother of Doug and Carol Whiteford of Ailsa Craig. Also survived by 13 grandchildren and 17 great-grandchildren. Dear sister of Marilyn of Caro, Michigan and sister-in-law of Pearl, Leslie and Ann. Predeceased by a brother-in-law Louis Smith. Friends may call at the Haskett Funeral Home, 223 Main Street, Lucan on Sunday afternoon 2-4 where the funeral service will be held on Monday, August 25th at 1:30 PM with son-in-law, Pastor Bill Morrison officiating. Interment St. James Cemetery, Clandeboye. Donations to the Canadian Diabetes Association would be appreciated by the family.

Offer Condolence for the family of Helen Roselee (Arndt) Whiteford