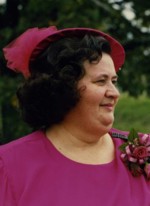 Peacefully at home in Lucan on Friday, April 20, 2012 in her 72nd year. Beloved wife of the late George Cunningham (1999). Dear mother of Dorothy Kestle of Surrey, B.C., Kevin and Dianne Kestle of Brantford, Carol and Dan Sloetjes of Lucan and Perry Cunningham and his friend Sharon of London. Dear grandmother of Lance, Amber, Bailey and Ruby; Jennifer and Stephanie; Katrina, Stephen, Joshua, Kurtis and Owen; and Renee. Dear sister of Sharen and Dave Newman of Lucan, Tom and Kate Kestle of London, Nancy and Michael Stahle of Lucan and Janis Kestle of Alberta. Predeceased by her parents Dave and Eleanor Kestle and an infant brother John.

Friends may call one hour prior to the funeral service which will be held at Living Hope Church, 120 Main Street, Lucan on Tuesday, April 24th at 1:30 P.M with Pastor Brad Sumner officiating. Interment Nursery Cemetery, North Middlesex.

Donations to V.O.N. Middlesex – Strathroy would be appreciated by the family.

Offer Condolence for the family of Helen Jane (Kestle) Cunningham