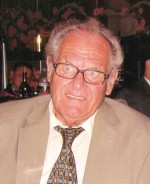 Passed away suddenly, on Tuesday, March 8, 2011, at South Huron Hospital, Exeter in his 81st year. Dearly loved husband and best friend for 57 years of Ann (van den Heuvel) Klungel. Beloved father of Al and Christie Klungel, Aileen and Fred Knip, Peter Klungel and Sonya, and Eloise Klungel. Dear grandfather of Chelsea, Troy and Rachel Klungel; David, Michael, Nicholas, and Tyler Knip. Brother of Marten, Nico, Martha, Ida, and Aukine of the Netherlands, and pre-deceased by his brother Arend and sister Ineke. Harry was born in Winschoten, the Netherlands, son of the late Albert & Aukine Klungel (Buurma); emigrated to Canada with Ann in 1954. After working as a carpenter and a nurse, he continued in the healthcare field in 1964 with the purchase of Queensway Nursing Home in Hensall, and he furthered his business interests with the purchase of a number of apartment buildings. His desire to serve his community was realized when he successfully ran and became Reeve of Hensall in 1982 and served for two terms and upon moving to Exeter continued his public service as a town councilor. He regularly volunteered with several organizations. He had a number of varied interests which included reading, cooking, vacations (especially cruises), and his grandchildren.

In lieu of flowers, memorial donations in Harry’s memory to Community Living South Huron are appreciated as an expression of sympathy.

Offer Condolence for the family of Harm (Harry) Marten Klungel