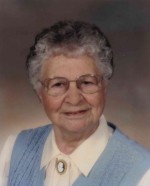 Peacefully passed away at Caressant Care Nursing Home, Woodstock on Friday, July 15th, formerly of Tillsonburg in her 99th year. Predeceased by her husbands D. Blake McDonald (1959) and Lawrence L. Grose (2007). Dear mother of Carol and Dennis Sifton of Williamsburg, Virginia and Joan and James Kent of Woodstock. Dear grandmother of Nicole Sifton and fiancé Carlo Bellusci of Calgary, Alberta, Erin and Stu Fraser of Victoria, B.C. and Leigh Sifton of Victoria B.C.; Joel and J’Neanne Kent of Woodstock, Jennifer and David Merrick of Grande Prairie, Alberta, great-grandmother of Stella and Sasha Fraser, Dylan and Jalen Merrick, Evan and Graydon Kent and step-grandmother of Matteo, Dominic and Christiana Bellusci. She was the sole survivor of her family. Grace “Bonnie” was a graduate of Victoria Hospital, London (1935), a member of First Baptist Church Choir and St. Paul’s United Church Choir. She was also an Eastern Star Member (Tillsonburg) for over 50 years.

Donations to the charity of your choice would be appreciated by the family.