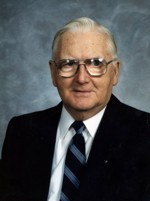 At Kensington Village, London on Friday, January 11, 2008 George S. Thomson formerly of Ilderton in his 93rd year. Beloved husband of the late Annie (Parkins) (Flynn) Thomson (2001) and the late Marion (Scott) Thomson (1988). Dear step-father of Jim and Doreen Flynn of Mitchell and Don and Greta Flynn of Dorchester. Dear grandfather of Jim, Mike, Steve and Kelly;  and Mark and Lori.  Also survived by many great-grandchildren.  Dear brother of Florence (Becky) Thomson of Toronto.   Predeceased by a sister Agnes Somerville (1988) and brother-in-law Cameron Somerville (2003).   Special uncle of Jane Somerville and David Caspari of Toronto, Mary and Ernie Pennell of San Diego and Neil and Jackie Somerville of Bracebridge.  Also survived by many nieces and nephews. Friends may call at the Haskett Funeral Home, 223 Main Street, Lucan on Sunday afternoon 2-4 PM where the funeral service will be held on Monday, January 14th at 11 AM with the  Rev. Bill McAuslan  officiating. Interment Carlisle Cemetery. Donations to the charity of your choice would be appreciated by the family.  A Masonic Service will be held in the funeral home Sunday afternoon at 4 PM under the auspices of Henderson Lodge # 388 A.F. and A.M. Ilderton.

Offer Condolence for the family of George Samuel Thomson