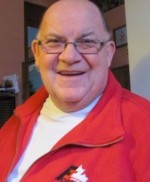 Passed away peacefully surrounded by his love ones at LHSC-University Hospital, London, on Sunday, September 14, 2014, of London in his 73rd year.  Dear father of Cindy and Brock Salmon of London, Jeff Gard and David Caloren of London, Brad Gard and Jodie Rancourt of London, and Marcy and Mustaq Khan of Strathroy.  Dear grandfather of Bailey and Neil, Dayton, Mackenzie, Brayden; Lexy and Connor.  Best friend of Eileen Como (Gard).  Dear brother and brother-in-law of Carol and Bob Perkins of Port Severn, and Paul and Brenda Gard of Yellowknife.  Predeceased by his brother David. Survived by his Aunt Shirley Carson and many nieces, nephews and cousins. Bob was a life time employee (54 years) with A&P.

A Celebration of Life for Robert will be held at the Royal Canadian Legion, Byron –  Branch #533, 1276 Commissioners Road West, London on Saturday, October 11th from 3:00 -8:00 pm. Cremation has taken place.

Donations to the Children’s Health Foundation or the charity of your choice would be appreciated by the family.

Offer Condolence for the family of GARD: Robert of London