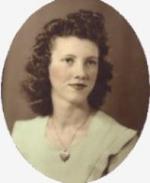 Friends and relatives will be received at the J.M.McBeath Funeral Home, 79 King St., Hensall on Friday from 2-4 and 7-9 pm., where the funeral service will be held on Saturday, January 14th at 2 pm. Interment Bayfield Cemetery.

Donations to the Alzheimer’s Society or the Heart and Stoke Foundation would be gratefully appreciated.

Offer Condolence for the family of FERGUSON: Margaret E. “Peggy”