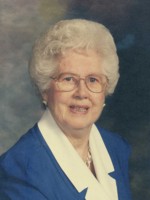 Peacefully, at South Huron Hospital, Exeter on Thursday, September 20, 2007 Esther Sarah (Duffy) Rau of Exeter and formerly of St. Joseph in her 90th year.  Beloved wife of the late H. Alvin Rau (1972).  Loving mother of Pamela and Tony De Jong of Exeter.  Proud and loving grandmother of Toni De Jong and Sean Thomas of Goderich, Dawn De Jong of Scarborough and Christopher De Jong of Exeter.  Dear sister of Rita Manley of Stratford and Bob and Ruth Duffy of Dublin.  Predeceased by her brother Louis Duffy and sisters Mary O’Brien and Vera Murray.  Esther touched many lives in her life as a teacher.  She started her teaching career at the one room school, SS #1 Stanley in 1937 at the young age of 20.  Her students knew her as a wonderful teacher but a very strict one.  After a brief retirement, Esther was hired to be principal at St. Damien School in Grand Bend.  When the school was closed, she came to Precious Blood School in Exeter where she taught until 1979.  She felt great pride in her students and their accomplishments and was always happy to meet with former students anywhere she went.  Friends may call at the Haskett Funeral Home, 370 William Street, 1 west of Main, Exeter on Friday 3-5 and 7-9 PM.  The Funeral Mass will be held at Precious Blood Church, 200 Sanders Street West, Exeter on Saturday, September 22nd at 10 AM with Father Ray Lawhead celebrant.  Interment St. Peter’s Catholic Cemetery, St. Joseph.  Donations to the Exeter Villa, South Huron Hospital or the Precious Blood Building Fund would be appreciated by the family.  Prayers will be said in the funeral home Friday evening at 8 PM.

Offer Condolence for the family of Esther Sarah Rau