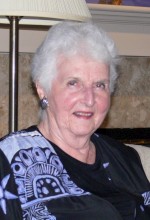 After a long illness Chrissie passed away at PeopleCare Oakcrossing in London Ontario on April 5th, 2014. Chrissie was born 87 years ago in Cleveland Ohio as her parents, William MacLeod and Margaret MacLeod transitioned from Scotland to Guelph Ontario. Chrissie will be so greatly missed by her life long companion and sister M. Margaret Fawcus of North Vancouver. Chrissie’s husband Harold George Elliott predeceased her by 55 years and she became the excellent role model for four children, Brian W. Elliott of Phoenix, Colin E. Elliott (deceased), Laurie A. Elliott of Moncton and her baby C. Bruce Elliott of Grand Bend. Chrissie was loved by her in-laws Rauly E. Elliott and his lovely bride Louise Elliott and their children Darrin and Brenda and families. Chrissie spent many years in Scarborough as her children grew up. After the death of her son Colin, Chrissie spread her wings and moved to her beloved West Coast where she was enveloped by the Fawcus children and the families of Susie, Jenny, Linda and Billy and their father Ken Fawcus (deceased) husband of M. Margaret Fawcus. Chrissie lived in both Richmond and North Vancouver in B.C. When it became necessary to move Chrissie back to Ontario daughter in Law Tena Louise (Brand) Elliott and C. Bruce Elliott along with her grandchildren Scott Christopher Elliott and Paige Christina Elliott enjoyed visiting and bringing treats to Nana. Chrissie always looked forward to their visits and the black cherry ice cream that they would bring. Chrissie stayed in touch with us all by sending us gentle nudges from Chrissie’s Clipping Service. You were never too old to receive a newspaper article that would suggest a new path for us to follow. In Ontario Chrissie was welcomed into the Tina Brand family of Exeter including her children Ron, Helen and Bob and families. Chrissie was always the beloved leader of our little Elliott family and she will be greatly missed. Chrissie was very loved. Chrissie was well cared for by the staff at PeopleCare Oakcrossing and they helped her mightily in her last hours.

Cremation has taken place and a private family graveside service will be held at a later date in Farnham Cemetery, Arkell. Haskett Funeral Home, Exeter (519-235-1220) entrusted with arrangements.

Donations to the Alzheimer’s society of Canada would be appreciated by the family.

ELLIOTT: Chrissie of London and formerly of Richmond, B.C. and North Vancouver B.C.

Offer Condolence for the family of ELLIOTT: Chrissie of London and formerly of Richmond, B.C. and North Vancouver B.C.