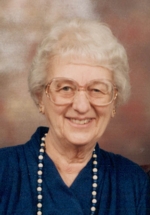 CORNISH, Elizabeth (Betty) – Quietly, on Thursday, November 24, 2011 at the Blue Water Rest Home in Zurich, in her 93rd year. Born in Wellingborough, England on February 20, 1919 to Major Richard and Marion Brown the first part of her life was devoted to the study and teaching of ballet and dance, culminating in the founding of the Kilburn School of Dance in 1937. In June 1944 she married Ralph Cornish of Elimville, Ontario, then stationed in England, After the war, they settled near Bayfield and in 1987 retired to Exeter. She is survived by her sons Victor S. Cornish, wife Geraldine and grandchildren Jennifer and Gwen of Langley, British Columbia; and C. Robert Cornish of Exeter, as well as may nieces and nephews, especially her dear niece Jennifer Hall of Pulborough, England.

The family wishes to thank the volunteers and staff at Blue Water Rest Home for making the last years of her life as comfortable and content as they were.

Cremation with a private family graveside service at Exeter Cemetery is planned for a later date.

Donations to the Alzheimer Society would be greatly appreciated.

Offer Condolence for the family of Elizabeth (Betty) Cornish