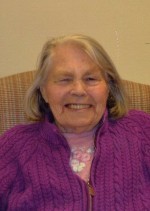 At Elmwood Place, London on Monday, February 16, 2015 formerly of Exeter and Usborne Townhip in her 94th year.  Beloved wife of the late Michael Dzioba (1986).  Dear mother of Philip and Linda Dzioba of Bayfield.  Dear grandmother of Sherri and great-grandmother of Sawyer and Sophie. Also survived by several nieces, nephews and cousins in Poland and the United States. Predeceased by a daughter  Jeanne Jones.

Friends may call at the Haskett Funeral Home, 223 Main Street, Lucan one hour prior to funeral service which will be held on Thursday, February 19th at 11:30 AM with Father Dariusz Lewandowski C.S.M.A. presiding.  Interment St. Peter’s Cemetery, London.

Offer Condolence for the family of DZIOBA: Alexandra (Futyma), formerly of Exeter and Usborne Township