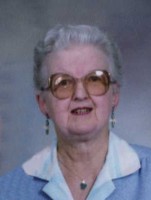 At Bluewater Rest Home, Zurich on Saturday, June 3, 2006 Dorothy (Corless) Breakey of Zurich in her 91st year.  Beloved wife of the late Kenneth Breakey (1994).  Dear mother of Richard and Kathy Breakey of Edmonton.  Dear aunt of John and Bonnie Corless of Peterborough, Susan and Jim Davies of Banff and Kevin and Marion Breakey of Calgary.  Dear sister-in-law of Dot Corless of Peterborough and Isabelle Breakey of Calgary.  Predeceased by brothers Ben and Alvin, sisters-in-law Helen McKay and Marion Bain, brother-in-law Keith Breakey and her parents Mort and Pearl Corless.  There will be no funeral service or visitation.  Donations to the C.N.I.B. or the Heart and Stroke Foundation would be appreciated by the family.  Hopper Hockey Funeral Home, Exeter (235-1220) entrusted with arrangements.

Offer Condolence for the family of Dorothy Grace (Corless) Breakey