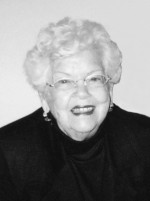 Dora Ringland (Dora Beatrice (Glanville) (Lloyd) (Hinojosa) Ringland died August 27, 2010, at Valley View Retirement Community, Pennsylvania.  She was born on September 14, 1919 and raised on the Manitoulin Island, Ontario, Canada, as the daughter of Harold and Tillie Glanville, who preceded her in death.  She had seven brothers, Charles, Chester, Frank, Fred, Harold, John, Leslie, Lyman and Steve and one sister, Eva.  Only Harold and Leslie survive.

She was married in 1939 to Leslie Lloyd, and the couple had one child, Reginald.  Both are deceased.  She married Victor Hinojosa in 1946, a union which produced her daughter, Cazella (“Casey”) Goodall, married to Amos, of State College, Pennsylvania.  Victor died in 1959.  Her third marriage was to the late John Ringland.  Their child was J. Granger Ringland of Rochester, NY, married to Dona.  In addition to Casey and Granger, she is survived by three grandchildren, Hawley Goodall Scull, Christian Goodall and Zadock Ringland and her great granddaughter, Irelyn Ringland.

Dora’s interesting life story is told in her book “The Lot”. After leaving the family farm at age eighteen, she worked as a governess, model, and makeup artist, which sent her on international assignments.  The endeavor that gave her the most joy was restoring old homes as well as buying and selling antiques.  She received a number of historic preservation awards recognizing her work in renovating the “Pearly Gates Tavern” in Rushville, NY, the birthplace of Marcus Whitman.  She relocated to Centre County in 1983, living in Boalsburg where she renovated the Tanner’s House on Loop Road and then moving to Linn Street in Bellefonte.

Friends may call at the Haskett Funeral Home, 370 William Street, 1 west of Main, Exeter on Thursday 2-4 and 7-9 PM where the funeral service will be held on Friday, September 3rd at 11 AM with Rev. John Henderson officiating.  Interment Exeter Cemetery.

The family requests that her friends remember her spirit and zest for life with a donation to the National Epilepsy Foundation, 8301 Professional Place, Landover MD 20785 or online at www.epilepsyfoundation.org.