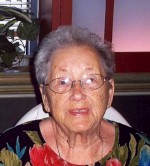 Peacefully after a brief illness, surrounded by the love of her family at LHSC-University Hospital, London on Sunday, October 6,  2013 in her 90th year. Beloved wife of the late Robert (Bob) Craig (July 13, 2013) for 67 years. Loving mother of Carolyn and Bill Ideson of Arva, Vera and Don Henderson of Ilderton and Jeff and Martha Craig of High River, AB.  Loved by her grandchildren Bob and Katharine; Kristy and Mike, Brad and Amy, Greg and Morgan, Jenna and Chris; Jillian and John, Gwen and Dan and great-grandchildren Taylor, Emily, Owen, Kyle, Rachael, Colin, Megan, Lucas, Jordyn, Elizabeth and Malcolm.  Dear sister of Glenys Wells of Newfoundland. Sister-in-law of Ila Worsell of Goderich and Betty Cox of Clinton. Beulah will be sadly missed by her many nieces and nephews. Predeceased by her brother Fred Stryde, sisters-in-law Sadie Stryde, Dorothy Strasser and  Layne Craig and brothers-in-law Bill and Allen Craig, Stan Strasser and Harry Worsell.

Friends may call at the Haskett Funeral Home, 223 Main Street, Lucan on Tuesday, October 8th from 10 – 11 AM where the funeral service will be held at 11:30 AM.  Interment Littlewood Cemetery, Ilderton.

Donations to Ilderton United Church or the Ailsa Craig and Area Food Bank would be appreciated by the family.

CRAIG: Beulah May (Stryde) of Ilderton

Offer Condolence for the family of CRAIG: Beulah May (Stryde) of Ilderton