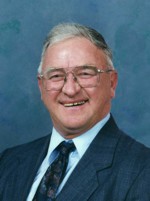 At South Huron Hospital, Exeter on Tuesday, April 4, 2006 Clifton (Clif) W. Jaques of Exeter in his 81st year.  Beloved husband of Leona (Dobson) Jaques.  Dear father of Yvonne and John Elliott of Thorndale and Dalton and Sandy Jaques of Usborne Township.  Proud grandfather of Leanne and Andrew and Charlsey and Kelsey.  Dear brother of Ross Jaques of Hensall.  Predeceased by a sister Verna and her husband Sam Bower, a brother Oliver Jaques and his wife Wilhelmine, a sister-in-law Helen Jaques and an infant brother James Frederick.  Friends may call at the Hopper Hockey Funeral Home, 370 William Street, 1 west of Main, Exeter on Thursday 2-4 and 7-9 PM where the funeral service will be held on Friday, April 7th at 1:30 PM with Rev. Michelle Down officiating.  Interment Exeter Cemetery.  Donation to the South Huron Hospital would be appreciated by the family.

Offer Condolence for the family of Clifton (Clif) Wesley Jaques