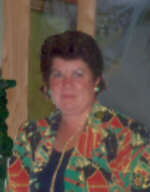 At London Health Sciences Centre, University Campus on Sunday, September 12, 2004 Beverley (Bev) J. Butler of Exeter in her 62nd year. Companion of Doug Sillery of Usborne Township. Daughter of Harold and Jean Butler of London and the late Doris (Kleinfeldt )Butler (1983). Mother of David, Deborah, Diana, Dwayne and Dora. Also survived by 14 grandchildren. Dear sister of Jerry Butler of Saskatoon, Sask. and Marlene and Rick Thornton of Exeter. A Memorial Service will be held at Faith Tabernacle 140 Victoria St, Centralia on Monday, September 20th at 7 PM with Pastor Cathy Prout officiating. Cremation with interment Staffa Cemetery. Donations to the Heart and Stroke Foundation would be appreciated by the family. Hopper Hockey Funeral Home, Exeter 235-1220 entrusted with arrangements.

Offer Condolence for the family of Beverley Joan Butler